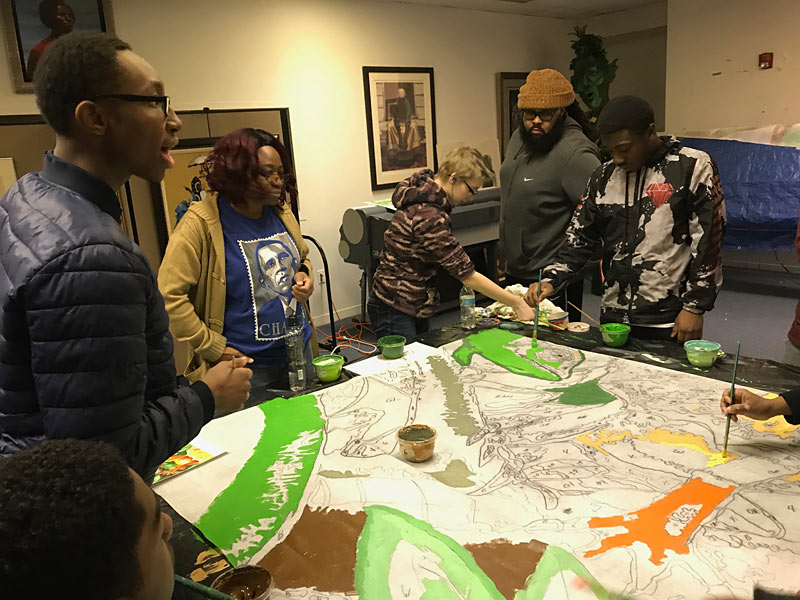 Boys and Girls Club volunteers working on part of a new Sankofa Fine Arts Plus mural.

In 2018, Sankofa Fine Art Plus received a grant from the Gund Foundation to create a mural in Glenville. For this project we included youth from the Glenville Boys and Girls Club.

In addition, we teamed up with Cleveland Police Department’s Black Shield Club. The youth from the Boys and Girls Club received stipends for their participation, this ensured that attendance by the same participants remained consistent, and showed the youth volunteers their work was valued. 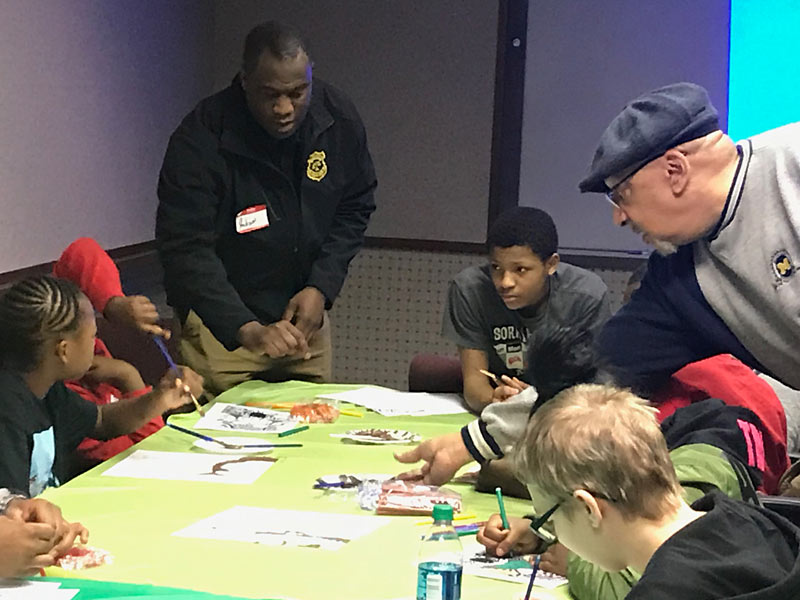 Volunteers from the Boys and Girls Club and the Cleveland Police Department.

Sankofa invited two local African American artists to join the three sessions dedicated to developing the mural’s message and theme.  Through this process, the participants agreed to adopt a quote by Dr. Suess as the mural’s theme:

“Why try to fit in when you were born to stand out?”

The local artists were paid to take the quote and translate it into a visual concept. In total, a concept was submitted by Sankofa and the two local artists and the project volunteers then voted on which image they felt best captured the quote.

For this mural, the group selected the concept submitted by artist S. C. Versillee for development. The selected concept depicted a field of green chameleons and one brightly colored fringed lizard. 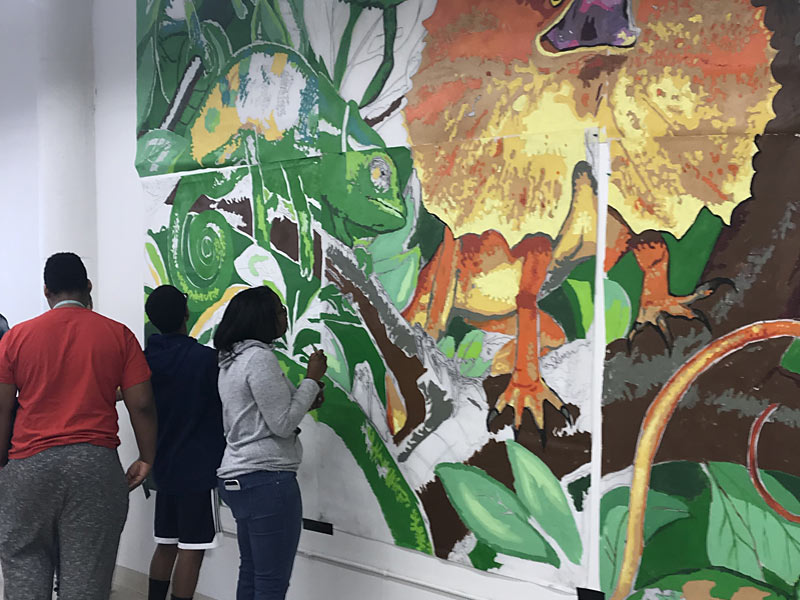 Following Sankofa’s usual process, we reduced the chosen design to a “paint by number” format so that everyone in the group could easily participate in painting the image.

The completed mural was installed at Franklin D. Roosevelt school; the school that also housed the Boys and Girls Club. 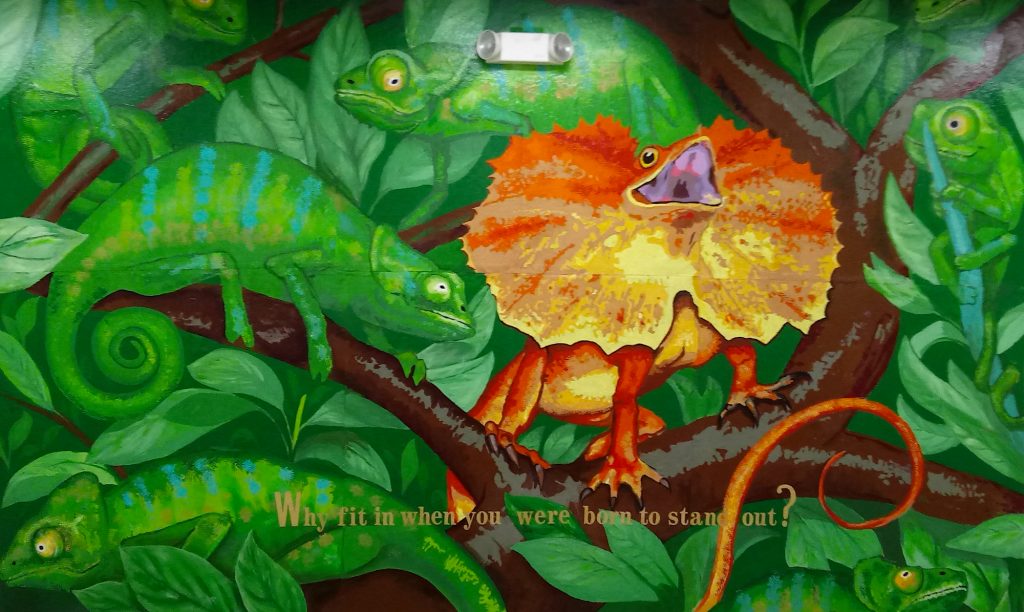 In 2017, Sankofa Fine Art Plus received grants to install a new mural in the Glenville neighborhood.  We gathered community input to decide on the theme.

Based on the community’s response “Our Lives Matter!” we decided not only to highlight the problems that make this statement relevant, we  also tried to do our small part to provide a solution.

We contacted the Cuyahoga County Juvenile Court and the Cleveland Police Department, inviting them to participate in a program that would bring these arguably disparate groups together to design and paint a mural.  They both agreed.

The program was designed by Gary Williams — an artist, former prosecutor, and legal educator — and Robin Robinson — an artist, art therapist, and a former special education teacher. Both Robin and Gary are principle team members at Sankofa Fine Art Plus.

The goal for bringing the youth and police officers together on this project was the hope that by working cooperatively, the two sides would be able to move beyond any commonly accepted stereotypes and preconceptions they had about each other.

The program was designed for the youth and the officers to meet every Saturday afternoon for two to three hours for ten to twelve weeks. This was a commitment that both groups were willing to accept.

The first phase involved standard “ice breaking” and “getting to know you” exercises. It took a while for the participants to lower their defenses.  But after two to three sessions we were able to slowly transition into the important second phase; concept design.

For the next three weeks we studied slides of other established murals and discussed the theme of the mural we would be working on.  The conversations of the youth continuously circled back to their perceived lack of power in their lives. It was soon established that:

“Knowledge is the only true power because no one could ever take it away from you”.

Everyone unanimously agreed on the theme “KNOWLEDGE IS POWER” . The group then voted on the people they felt represented universal wisdom and whom had great power.  Maya Angelou, Barak Obama, Martin Luther King Jr., and Tupak Shakur were the four icons that manifested to the inter-generational group and exhibited the qualities that they wanted to demonstrate to their community.

After experiencing the success of the Glenville mural “Our Lives Matter”, the City of Shaker Heights commissioned Sankofa Fine Art Plus to design a mural for their community.

The placement of the artwork would be on a 9 foot x 330 foot retaining wall in a underutilized park in Shaker’s Moreland neighborhood. Moreland is a largely African American community that for many reasons felt it was separated from the City of Shaker Heights as a whole. The front of the park was enjoyed as a playground for children, the back had an overgrown baseball diamond and was best known as an area where teens loitered and smoked on the dimly lit risers.

After much discussion Moreland residents were polled to assess their response to different concepts. The final design was made up of colorful puzzle pieces to represent the connection between Moreland and the other neighborhoods in Shaker Heights, intermixed with inter-generational images of Moreland community members.

More than thirty volunteers from all over Shaker Heights helped to draw and paint the mural. The once underutilized park is now is now a regularly used space for hosting community events and social gatherings. The baseball diamond has been revitalized and is currently being appreciated by many Shaker heights little league teams. The mural has brought a renewed sense of community to the area and the residents.

Sankofa Fine Art Plus is a 501(c)(3) non-profit organization. Make a tax deductible contribution to support our mission.

This website uses cookies to improve your experience while you navigate through the website. Out of these cookies, the cookies that are categorized as necessary are stored on your browser as they are essential for the working of basic functionalities of the website. We also use third-party cookies that help us analyze and understand how you use this website. These cookies will be stored in your browser only with your consent. You also have the option to opt-out of these cookies. But opting out of some of these cookies may have an effect on your browsing experience.
Necessary Always Enabled
Necessary cookies are absolutely essential for the website to function properly. This category only includes cookies that ensures basic functionalities and security features of the website. These cookies do not store any personal information.
Non-necessary
Any cookies that may not be particularly necessary for the website to function and is used specifically to collect user personal data via analytics, ads, other embedded contents are termed as non-necessary cookies. It is mandatory to procure user consent prior to running these cookies on your website.
SAVE & ACCEPT
0